Get up, stand up: new review looks at reducing sedentary behaviour in older adults

The ABC’s recent documentary series Old people’s home for 4 year olds surprised many by becoming a runaway ratings success. It attracted more viewers than Masterchef and took out an international Emmy Award to boot. It’s the first time the lives of lonely older Australians struggling with isolation, health and mental health issues have been the subject of so much public interest and attention. For Cochrane author Dr Paul Gardiner, this represents a welcome development.

‘One of the great public health successes of the twentieth century was increasing people’s lifespan,’ Paul says, ‘Now we really need a greater focus on the health and quality of life of older people throughout those additional years. To date, in many ways, they’ve been a largely forgotten population.’

Paul has long been interested in the well-being of older people, and believes understanding and addressing the impact of sedentary behaviour is one of the keys to delivering better health outcomes. As part of his broader research program, he recently co-authored a new Cochrane review on interventions for reducing sedentary behaviour in community‐dwelling older adults.

‘This is the first review of interventions specifically targeting older people living in the community,’ he explains. ‘This is especially important because while we often hear concerns about children’s screen time or office workers sitting for too long at their desks, older adults are actually the most sedentary segment of society—they spend over 80 percent of their waking day sitting. At the same time, increasing evidence is telling us that sedentary behaviour is detrimental to their physical and mental health. Among other things, it’s linked with depression, chronic diseases, frailty, social isolation and premature death.’

It’s worth noting that sedentary behaviour is often confused with inactivity but is actually distinctly different. The former involves sitting or reclining while awake—think watching TV for long periods—while inactivity is regarded as too little exercise/not meeting physical activity guidelines. So for example, you might meet physical activity guidelines by doing an hour of moderate intensity activity each day, but you could still be sitting for very long periods as well. 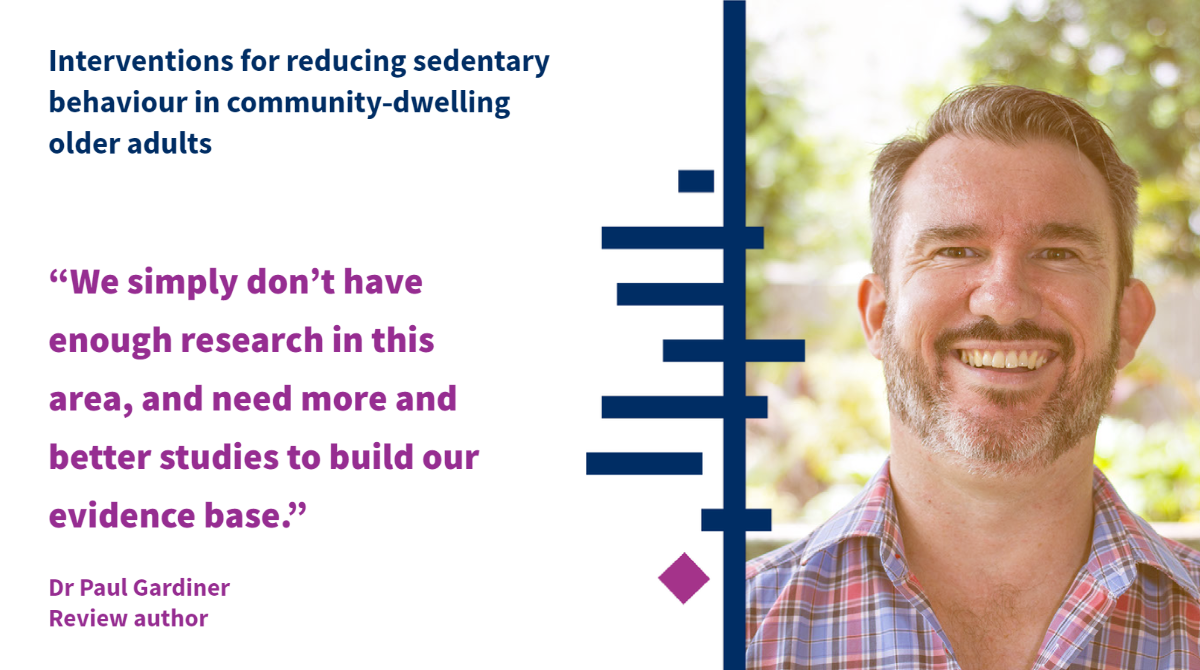 ‘Having weighed up the latest evidence for this review, our main finding was disappointing but not unexpected,’ Paul says. ‘In a nutshell, our conclusion was that we simply don’t have enough research in this area, and need more and better studies to build our evidence base.’

‘Overall I think this reflects that research in this area has often focused on younger populations, and that older people have largely been a neglected part of the population until recently, and that’s compounded by the fact the data we have on sitting time has only been gathered from as recently as 2000 onwards. So when we think about some of those big population cohort studies that have data from across 50 or 60 years, none of them ask about sitting time or sedentary behaviours across lifetimes and we don’t know if there are critical periods when it matters more how sedentary we are or if the impacts on health are accumulated. We’ll have to wait another few decades to get the kind of cumulative data we really need.’

‘For this latest review, we identified only seven relevant studies with 397 adults aged over 60—predominantly white, female and all from high-income countries. We really need to see future studies recruiting much larger and more varied global samples in terms of age, gender, ethnicity, and socioeconomic background. And within high-income countries, we need to recruit people from different cultural groups.’

Intervention-wise, the majority of studies looked at ways to help change sedentary behaviour through a combination of behaviour change techniques and strategies that included information, education, counselling and goal setting. Some used wearable technology and apps that record behaviour, others included prompts, text messages and phone calls. None of the studies looked at changes to the natural, built, home or social environment, or making changes at policy level.

‘Given the various limitations in terms of the size and quality of the studies, we can’t draw any definitive conclusions about whether these interventions are effective in changing sedentary behaviour at this stage,’ Paul says. ‘The evidence suggests they may reduce sedentary time slightly, but it’s unclear whether they have an impact on physical and mental health.’

‘The need for higher-quality randomised controlled trials assessing the impact of interventions is clear,’ Paul says. ‘We recommend that future studies use more device-based measures, with devices that recognise posture and can distinguish between sitting, standing or lying down. There needs to be greater consistency and accuracy around what’s measured, recorded and assessed. We also need accurate assessments of individual behaviours like TV viewing time as there is some evidence that not all behaviours have the same impacts on health.’

‘Throughout Covid lockdowns we’ve seen older people embracing FaceTime, Zoom and other apps to communicate with family and friends, and research suggests that older people will embrace technology if they're trained and understand how to use it. If we can encourage this and address access and equity considerations, hopefully technology will provide new avenues for effective interventions, research and data collection.’

‘With these developments on the horizon and more relevant studies currently underway, hopefully we'll be in a much better position to make more conclusive recommendations when it’s time to update this latest Cochrane review. In the meantime, here’s hoping the next series of Old people’s home for 4 year olds will provide top tips and information on the importance of reducing sitting time—for all the young and old alike.'